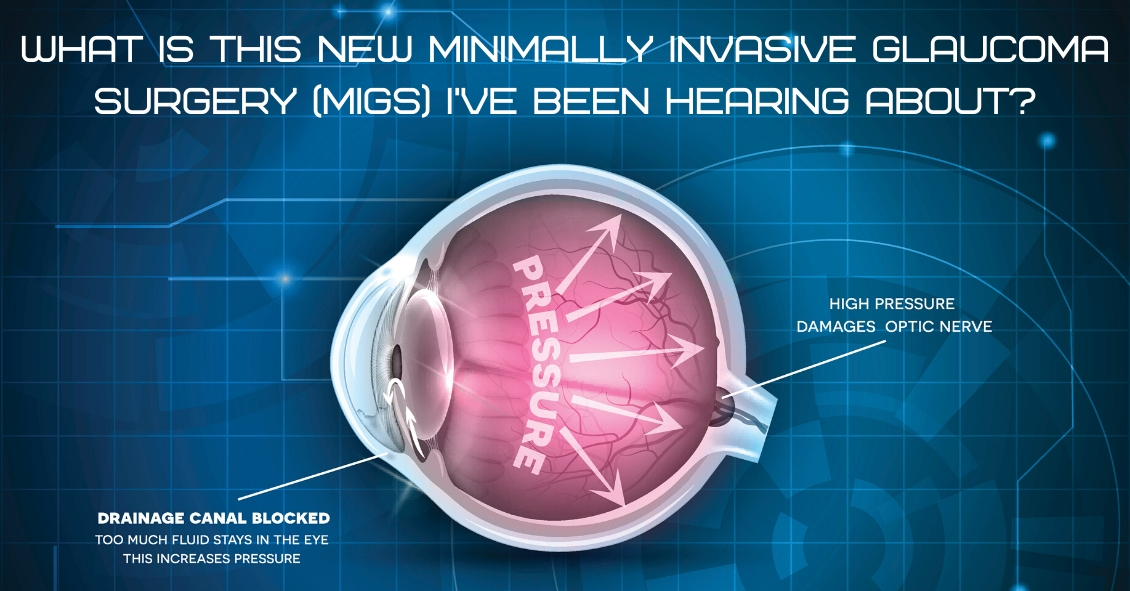 For over 40 years the standard surgical treatment for glaucoma was a procedure called a trabeculectomy.

In a trabeculectomy the ophthalmic surgeon would make a hole in the wall of eye to allow fluid from the inside of the eye to flow out of the eye and then get resorbed by the blood vessels in the conjunctiva (the mucous membrane that covers the white part of the eye).

This surgery often resulted in a large decrease in the Intraocular Pressure (IOP). Reducing the IOP is the goal of glaucoma surgery because multiple studies on glaucoma show that if you can reduce the pressure in glaucoma the progression of the disease slows.

The problem with trabeculectomy is although it frequently lowers the pressure it also has a fairly high complication and/or failure rate. This led to some reluctance to perform the procedure unless the glaucoma was severe, or the pressure was very high. As a result of those issues there has been a search during the last 40 years for something that had a lower complication rate and could be more easily deployed earlier in the disease process.

Enter Minimally Invasive Glaucoma Surgery, or MIGS.  There are now several types of surgeries that fit in the MIGS category and many of them are used in conjunction with cataract surgery. They are utilized much earlier in the disease process and when combined with cataract surgery they can be used to not only help control the pressure over the long term but can often even reduce the burden of eye drops afterward.

The lower complication rate is mainly because the MIGS procedures do not create a full-thickness hole in the wall of the eye.  Most of them involve putting in some form of stent inside the eye. The stent lets the intraocular fluid get out of the eye more efficiently through its normal internal drain called the trabecular meshwork, rather than having to flow to the outside of the eye as with a trabeculectomy. There are currently several FDA-approved drainage stents with more on the horizon.

A stent is not the only way to lower the pressure along with cataract surgery. There is also a laser treatment you can do from the inside of the eye that slows the amount of fluid the eye makes, which also results in a lower pressure. It is called Endocyclophotocoagulation (ECP). Think of a partially clogged drain in a sink with constantly running water. If you don’t want the sink to overflow (or the pressure in the eye to get too high) you either try to unclog the drain (stent) or you turn down the faucet (ECP).

MIGS has been a great development over the last several years, enabling the ophthalmic surgeon to intervene surgically at a much earlier stage of glaucoma and with a significantly lower complication rate than the more invasive trabeculectomy.

At this point I utilize one of the MIGS procedures in almost all patients who need their cataracts removed and are on one or more glaucoma medications. Even if the glaucoma is fairly well controlled at the time, the MIGS procedure gives us the opportunity to try and get a glaucoma patient off their eye drops, which is both a decreased burden of treatment and lets us keep the eye drops in reserve should the pressure start to increase again later in life.

If you have glaucoma and a cataract you should definitely discuss this with your doctor to see if a MIGS procedure along with your cataract surgery could be the right choice for you.