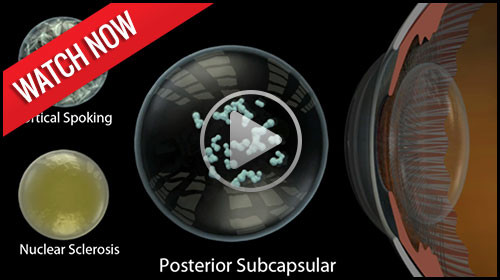 A cataract is an opacity of the lens of the eye. The body's natural lens is similar to an onion, with many layers. These layers contain protein and as the proteins clump together, they cover the lens and make it difficult to see clearly. Cataracts are generally seen in the older population, but they can occur at any age, even birth. By age 60, over half of the population has some symptoms of cataracts due to the natural aging process.

Cataracts are painless but if left untreated can lead to blindness. Cataract surgery is done on an outpatient basis with little or no downtime afterwards. The surgery is performed by a medical doctor known as an ophthalmologist, who specializes in surgery of the eye. The aftercare or postoperative care can be administered by an ophthalmologist or an optometrist.

There can be a myriad of symptoms when a person develops a cataract.  It is common for vision to be blurry, as though you are looking through a foggy window. Color vision changes occur in which the brightness of colors fade, especially blue and green. Patients with cataracts also experience difficulty in reading small print. They also feel like they need brighter light or possibly a new glasses prescription. Double vision or vision that seems like halos around the letters also occurs, as well as sensitivity to light.

The exact physiological cause of cataracts is unknown, but there are many risk factors. Aging and trauma are known to cause cataracts. A blunt trauma or injury to the eye can cause a cataract at any age. The effect of aging on the cells of the lens contributes to cataracts usually after age 60. There is also a direct correlation between the sun's UV rays and certain radiation exposures that contriibute to cataract growth. Smoking is a big risk factor for developing cataracts as well.

Poor nutrition can add to the risk of developing cataracts. Lack of vitamin C has been shown to increase the genesis of cataract formation. Some prescription medicines, especially prednisone, can cause cataracts. Diabetes and other chronic disease processes are also factors in cataract formation. Finally, there are genetic factors that contribute to a cataract.

The standard of care for the treatment of cataracts is typically surgery. Cataract surgery, which is an outpatient procedure, removes the protein accumulation from the eye by replacing the cloudy natural lens with an artificial lens. This artificial lens, known as an IOL or intraocular lens, will have your prescription, which in most cases, makes you less dependent on glasses. Technology has advanced over the years to offer IOL's that will correct astigmatism and presbyopia. Cataract surgery is one of the most commonly performed surgeries in the United States, and it has a success rate of over 98%.

There are many types of cataracts that form on the eye, with different levels of density. This can affect the post-operative care of cataract patients. After cataract surgery, it might be necessary to use a laser to clear an after-cataract membrane that can occur weeks to months after the procedure. This treatment uses a YAG laser and is a painless, low risk, in-office procedure. Most patients can return to work or normal activities within days after the procedure. Your doctor will likely prescribe eyedrops to prevent infection and swelling. 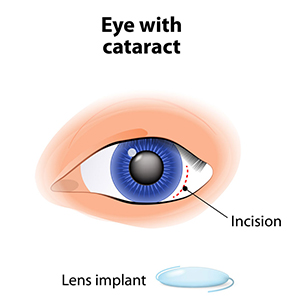 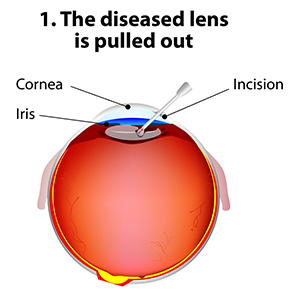 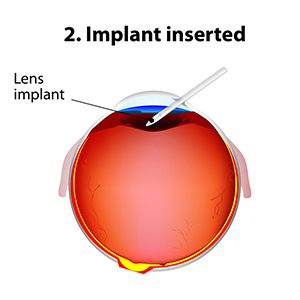 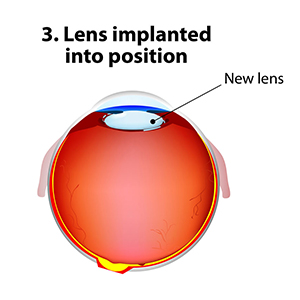 New technology in cataract surgery includes a bladeless customized procedure that allows for faster healing and clearer vision after the procedure. This computer assisted surgery uses a laser to make the incisions. The laser also divides the cataract efficiently so that the surgeon can remove the old lens and replace it with a new state-of-the-art IOL ( Intraocular lens). This technology uses a femtosecond laser which emits cool pulses of energy. This technology has been used for decades in LASIK surgery for the correction of myopia or nearsightedness. This form of cataract surgery now allows the procedure to be more precise, and reproducible.